Here’s a presentation I gave about Margaret Skinnider to the INTO Congress in Wexford at Easter 2016. Margaret Skinnider is well-known to many for her participation in the 1916 Rising, during which she was gravely injured, but there is a lot more to her than that, not least her trade union activism which saw her ultimately elected President of the INTO.

A discussion on the History Show on RTÉ with Journalist Pat Leahy and sociologist Niamh Hourigan after the 2016 general election on the civil war divide in Irish politics, and whether or not it’s still relevant today. 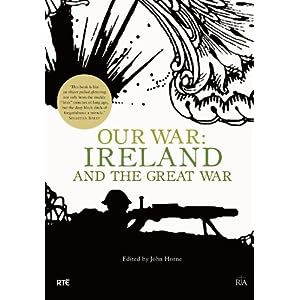 RTÉ marked the ninetieth anniversary of the end of World War one with a series of Thomas Davis lectures which was published by the Royal Irish Academy under the title Our War: Ireland and the Great War.

My lecture, ‘War, work and labour’ (no. 6) examined the economic impact of the war, its effect on working class men and their families and on the labour movement generally. It examined economic conscription where employers and the state colluded in efforts to get working men to sign up for war. It looks at how the war inadvertently strengthened the bargaining power of a trade union movement which had been shaken by the Lockout of 1913 and it looks at the vital role played by unions in spearheading resistance during the 1918 conscription crisis.

A discussion on RTÉ’s History Show from April 2012 on the centenary of the Labour Party which was (kind of) founded in Clonmel in 1912. Three of the contributors to a recent collection of essays marking the centenary – David McCullagh, Senator Ivana Bacik and myself – discussed Labour’s history with Myles Dungan. The vox pop at the beginning is the best bit, or perhaps, more accurately, the most disturbing. You can catch it here (begins at 20 minutes)

History Ireland held a Hedge School at Pearse Street Library on ‘Strumpet City: Was it really like that’ on 27 April 2013 as part of Dublin City Council’s One City One Book festival. Featuring myself, D.R. O’Connor Lysaght, Ann Matthews and John Gibney, it was chaired by Tommy Graham. You can listen to the podcast here. The INTO organised an evening on 20 November 2012 in the Teachers’ Club in Dublin in commemoration of TJ O’Connell, former INTO General Secretary (1916 -1948).  The well attended commemoration was organised in conjunction with events held to mark the centenary of the Labour Party (1912-2012). Speakers included Joe O’Toole (who shared three of TJ O’Connell’s offices, as INTO General Secretary, ICTU President and Senator), Niamh Puirseil, author and historian, John Cunningham, NUIG historian and Noel Ward, INTO Deputy General Secretary. Their contributions focussed on TJ’s career, his professional and political life, his contribution to the INTO and his legacy.

Video of the four presentations are available on the INTO website here.
Originally from Co Mayo, and following teacher service in Co Westmeath, O’Connell was elected INTO General Secretary in 1916. He was the ﬁrst full-time General Secretary and from 1918 was also a member of the Irish Trade Union Congress and Labour Party (a single organisation at the time).
O’Connell was elected to the Dáil at the General Election of 1922 and 1927 (for the constituencies of Galway and Mayo South,respectively) and, following the election of 1927, he became the second leader of the Labour Party succeeding Tom Johnson, a position he held until 1932.
O’Connell presided over the agreed division of the labour movement into separate political and trade union bodies in 1930, at which time he was President of the Congress of Trade Unions as well as Labour Party leader. He also continued as INTO General Secretary during this time.
His INTO career continued for many years after and he was General Secretary during the time of the celebrated 1946 Teachers’ Strike. O’Connell wrote a history of the INTO, 100 Years of Progress, for the union’s centenary in 1968.

The British Trade Union movement and the 1913 Lockout

Here is a short lecture I delivered to an event organised by Unite, DCTV and the Dublin Trade Union Council on 29 June 2013 outlining the role of the British Trade Union movement in the 1913 Lockout.  The main speaker at the event was the Unite General Secretary, Len McCluskey who discussed “British and Irish Trade Unionism: 1913 and 2013″. Newstalk’s Talking History featured a discussion on the life and work of Seán O’Casey on 25 November when I joined a panel of theatrical experts, Christopher Murray (author of the brilliant biography Sean O’Casey: Writer at Work), Terence Brown, Peter Sheridan and Mairead Delaney, the archivist at the Abbey Theatre. There was also an interview with his daughter Shivaun.

The podcast is available to listen to on iTunes here

This is a short introductory video about Catherine Mahon who was the first woman to be elected president of the INTO in 1913.